One of the most important moments during weight loss for me was the decision to commit. It wasn’t an easy decision and was often challenged. Sometimes the challenge was the ease of sitting on the couch instead of going to the gym. Other times, it was the convenience of fast food. It was frustrating; I wanted to be thin and feel beautiful, but struggled to commit myself to a different lifestyle than I was used to.

My lifestyle habits were put into perspective when I found myself working for a funeral home. I was experiencing death on a daily basis, up close and personal. Being responsible for all of the death certificates, I regularly encountered heart and weight-related diseases as the cause of death. It shook me knowing that my own Grandmother died from a heart attack at the age of 57. Weight loss became more than skin deep for me. It became about my health and wanting to live a full life.

I committed. I made healthy, attainable goals. The gym became my therapy instead of the refrigerator. I replaced pizza with chicken breasts. Repeating positive affirmations took the place of self-doubt. Reading positive quotes fueled me when I felt down or experienced setbacks.

It became clear that like a lot of thing’s in life, it was my choice. 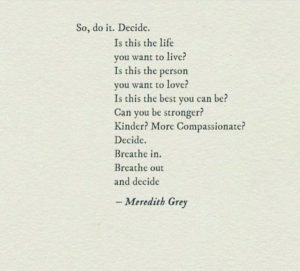